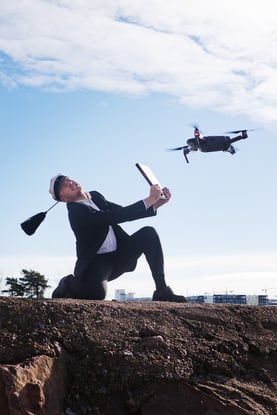 I rambled through my studies in the years when everything was changing. I started in TKK (Teknillinen Korkeakoulu), which then changed to the Aalto University of Technology. Later came the reforming of the Bachelor's programs and a little later same followed for the Master's programs. The study program that I started was called “Geomatics”, which is basically divided into Geodesy, Photogrammetry/ Remote Sensing, and Geoinformatics. Basically, 90% chose Geoinformatics as their major, since this was booming and was the new cool thing.
I don’t exactly remember why I wanted to follow Photogrammetry and Remote sensing, later setting my focus to UAV photogrammetry and laser scanning. In any case, at the end of my studies, I realized that I was in trouble. Over half of the few people who attended the same courses as I ended up in jobs that I called “researchers/ scientists”. I knew that was definitely not for me.

Our study program included a course called “Close range photogrammetry” and this course included an excursion to a company called Mapvision (about 4 years later to become my employer). At that point, I concentrated on the actual photogrammetry aspect of optical measurement technology. It has only been later that I have realized that my studies form a great base for understanding the actual technology, but the company consists of so much more and the actual skills that are needed are not so “photogrammetry-specific”. This was more than ok for me since I graved for interesting challenges and work opportunities in the customer interface (far from the research-type of work).

During the last years at the university, I worked at the school as a course assistant and by the time I finished my master’s thesis, I joined Mapvision. During my 2,5 years at Mapvision, I have progressed from the training team phase to a project engineer and my current position is working as a project manager for the actual delivery projects. Throughout the whole journey with the company, I have enjoyed working with technical aspects while concentrating my own career path to the customer interface and building myself as an important part of a great team.

My personal motivation comes from the fact that I am working in one of the toughest industrial sectors on the planet (the automotive industry) by contributing to the Finnish export market through a Finnish high-tech company. The automotive market area being global around the world means that I have the possibility to travel, but my home still stays at the headquarters based in Finland.

My advice is to remember and live your life. That is how you collect experiences and contacts. I attended exchange studies in Vienna, stayed the next spring just snowboarding in Tirol, had one year break from studies working in a totally different environment, attended many student guild activities, performed, produced, and gave my personal time to side activities like the student musical, Teekkarispeksi. The most valuable asset I have in my current job is from all the different types of know-how that I possess through all the activities that I have done.